Worcestershire Wildlife Trust's work at Lower Smite Farm is featured in a national report ‘Reversing the decline of insects’ that shows how people, in every part of society, wherever they live, can take action to bring back insects.

Everyone, everywhere, is being asked to become an insect champion.

The report cites examples of farmers, communities, councils and charities that are boosting insect populations and proving that it can be done.

The report comes at a critical time for insects. There is ongoing evidence for insect declines and the future of insects – and all life that depends on them – hangs in the balance as trade deals threaten to increase the use of insect-harming pesticides. Furthermore, the Agriculture Bill is progressing through Parliament presenting a unique opportunity to ensure farmers pursue insect-friendly farming methods.

Today’s publication follows the ‘Insect declines and why they matter’ report, launched last year, which examined mounting evidence that insect populations are close to collapse and concluded that “the consequences are clear; if insect declines are not halted, terrestrial and freshwater ecosystems will collapse, with profound consequences for human wellbeing.”

The new report features work undertaken by Worcestershire's largest conservation charity at their Lower Smite Farm headquarters. The 65 hectare mixed arable farm is managed to increase the diversity and abundance of wild pollinators and beneficial insects.

No insecticides, slug pellets or livestock wormers are used on the farm. More than 2km of species-rich hedges have been planted, 500m of beetle banks created and 50 log piles built for insects.

Lower Smite Farm acts as a demonstration farm and, with a grant from DEFRA, the Trust runs a Wild Pollinator Facilitation Fund  working with more than 50 farms to share learning.

Caroline Corsie, the Trust's Senior Land Adviser, explained "Lower Smite Farm is nationally important for its arable weeds and, with a wide variety of restored wildflowers on site, one visiting farmer said that it looked like it had been 'flower-bombed'.

"We share our experience and work with others to help provide corridors through our landscape through which insects can move. Our Wild Pollinator Health Check looks for what we call 'The Big Four' - year-round food supplies, safe breeding and wintering habitat, connectivity of habitat and, finally, removing causes of stress such as pesticides."

Recent research into solitary bees on the farm discovered that our approach is working with an abundance of these tireless pollinators recorded.
Caroline Corsie
Worcestershire Wildlife Trust

Worcestershire Wildlife Trust is adding their voice to the national call on Government to reverse the decline of insects by:

The Wildlife Trusts believe that reversing the decline of insects is possible if: 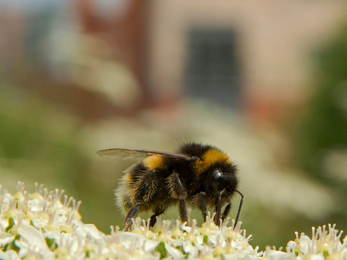 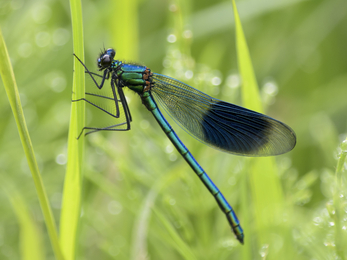 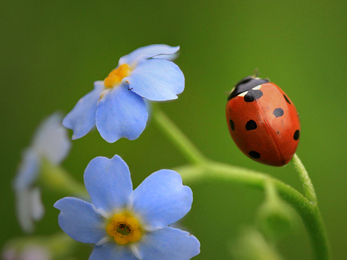 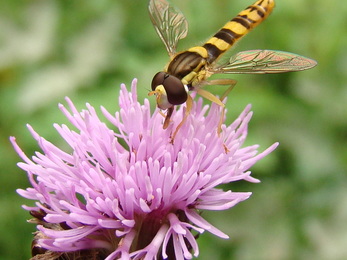 41% of our insect species in the UK are at threat of extinction. This is having a huge effect on the rest of the natural world. The vital role that insects perform is undermined and everything that depends on them suffers, from hedgehogs to nightingales, wildflowers to wetlands.

We’re calling on everyone to take action for insects and become an insect champion.”
Colin Raven
Director, Worcestershire Wildlife Trust

Lead author of the report, Professor Dave Goulson of the University of Sussex said:

“If we get it right for insects we get it right for everything else. Insects are the canaries in the coal mine – their collapse is an alarm bell that we must not ignore. Action is needed from every section of society – we all need to change this together.”

A new survey of over a thousand people who have already signed-up to take Action for Insects with The Wildlife Trusts, reveals the most popular actions people have been taking:

Read 'Insect Declines and Why They Matter' report

More information on the key changes that need to be made to reverse insect decline:

Reversing the decline of insects report shows how:

We welcome the target setting framework in the Environment Bill (in England), which will set legally binding targets in four areas – biodiversity, air, water, and waste and resources. As well as being legally binding, these targets must be comprehensive, enforceable and ambitious, with the aim to achieve an environment that is recovering, healthy, diverse and resilient for the benefit of people and wildlife.  Read The Wildlife Trusts' latest Environment Bill blog and a summary Greener UK briefing.

To properly look after insects and other wildlife there needs to be more places where they can thrive – rich habitats that are free of pesticides and, crucially, linked up so that insect populations are not cut off and can move as the climate changes. The UN Convention on Biological Diversity calls for a commitment to at least 30% of land and seas to be covered by wildlife-rich habitat to tackle the climate and ecological emergency. Conservation organisations cannot buy and manage the necessary tracts of land, so a recovery network for nature that encompasses our gardens, highways, villages, cities and the wider countryside will be a major contribution towards reversing insect declines. Currently about 15% of land in England is protected for nature.  [The figures we have come from Prof Sir John Lawton’s Making Space for Nature and from Natural England which state, in, for example, England: 8.4% land is a Site of Special Scientific Interest; 1.4% land is a nature reserve; 5.2% land is a Local Wildlife Site.] The Government have committed to protecting a further 4% in England through their 25 Year Plan but this has not yet been achieved. The Wildlife Trusts want to see the current area for nature doubled through a Nature Recovery Network of new, restored and joined-up areas so that wildlife can expand and move around.

For Insects in our Farmed Landscape…

The Wildlife Trusts are calling on the UK Government to ensure that public funds pay for delivery of public goods by redirecting farm subsidies to support genuinely sustainable farming systems. The UK Government should set targets for major reductions in pesticides and support farmers to work with nature and to transition away from unnecessary pesticide use by adopted Integrated Pest Management and other more sustainable farming methods. Investment in initiatives that can bring farmers, conservationists, businesses, Local Authorities and independent experts together to share resources and learning could help to transform the fortunes of our insects in the wider countryside.

For Insects in our Towns and Cities…

All Local Authorities could make more space for nature in towns and cities, and eliminate the routine and unnecessary use of pesticides. The Wildlife Trusts are involved in creating insect-rich habitats right in the middle of our biggest towns and cities and the Pesticide Action Network (PAN UK) is leading the charge for pesticide-free towns. The UK Government should provide leadership by setting targets to drive action and we can all do our bit to create pesticide-free, insect-friendly spaces on our balconies and allotments and in our gardens and parks.

For Insects in our Rivers and Streams...

It is critical that new legislation builds on and strengthens the current water protections under EU law, and that the future system of farm payments supports practices to reduce pesticides and prevent soil and chemical run-off into rivers and streams. More can be done to ensure that rivers function naturally, and to restore natural processes across whole landscapes. After reducing chemical use and soil erosion at source, we also need to harness the innate ability of wetland habitats to filter the water that runs off the land and to stop our soils from being washed downstream. We need better monitoring of pollution in our water and we need water companies, farmers, Local Authorities, and conservationists to work together to safeguard our rivers. Every one of us has a role to play, through creating more ponds or wet boggy areas where we live and thinking about what we pour down our drains. This will help to reverse the decline of our freshwater insects and protect insects everywhere.

To be Insect Champions...

We should tell policy makers that we want insect declines to stop and hold our elected representatives to account.  But we must also accept that our own actions have the power to alter the fortunes of our insects for better or worse.  Let’s take action in our daily lives to create insect-rich places and stop the use of pesticides where we live and work! As consumers, we can support those farmers, food producers and businesses who are trying to make a difference, and we need to inspire future generations to care too.

Insect Declines and Why They Matter

This earlier report was published in November 2019 by an alliance of Wildlife Trusts in the south west. It concluded that drastic declines in insect numbers look set to have far-reaching consequences for both wildlife and people.  The report was written by invertebrate expert, Dave Goulson, and highlighted the severe effects of the declines on insect-eating birds, bats, and fish, and the cost to society due to lost revenue and broken ecosystems. It brought together evidence showing that we have lost 50% or more of our insects since 1970, while 41% of the Earth’s remaining five million insect species are now ‘threatened with extinction’. To take just two examples in the UK: the geographic ranges of many bumblebee species have more than halved between 1960 and 2012, and numbers of butterflies fell by 46% between 1976 and 2017. It concluded that “the consequences are clear; if insect declines are not halted, terrestrial and freshwater ecosystems will collapse, with profound consequences for human wellbeing.”

Dave Goulson is Professor of Biology at University of Sussex, specializing in bee ecology. He has published more than 300 scientific articles on the ecology and conservation of bumblebees and other insects. He is the author of Bumblebees; Their Behaviour, Ecology and Conservation, published in 2010 by Oxford University Press, and of the Sunday Times bestseller A Sting in the Tale, a popular science book about bumble bees, published in 2013 by Jonathan Cape, and now translated into fourteen languages. This was followed by A Buzz in the Meadow in 2014, Bee Quest in 2017, and The Garden Jungle in 2019. Goulson founded the Bumblebee Conservation Trust in 2006, a charity which has grown to 12,000 members. He was the Biotechnology and Biological Sciences Research Council’s Social Innovator of the Year in 2010, was given the Zoological Society of London’s Marsh Award for Conservation Biology in 2013, was elected a Fellow of the Royal Society of Edinburgh in 2013, and given the British Ecological Society Public Engagement Award in 2014. In 2015 he was named number 8 in BBC Wildlife Magazine’s list of the top 50 most influential people in conservation. In 2018 and 2019 he was named as a “Highly Cited Researcher” by Thompson ISI.